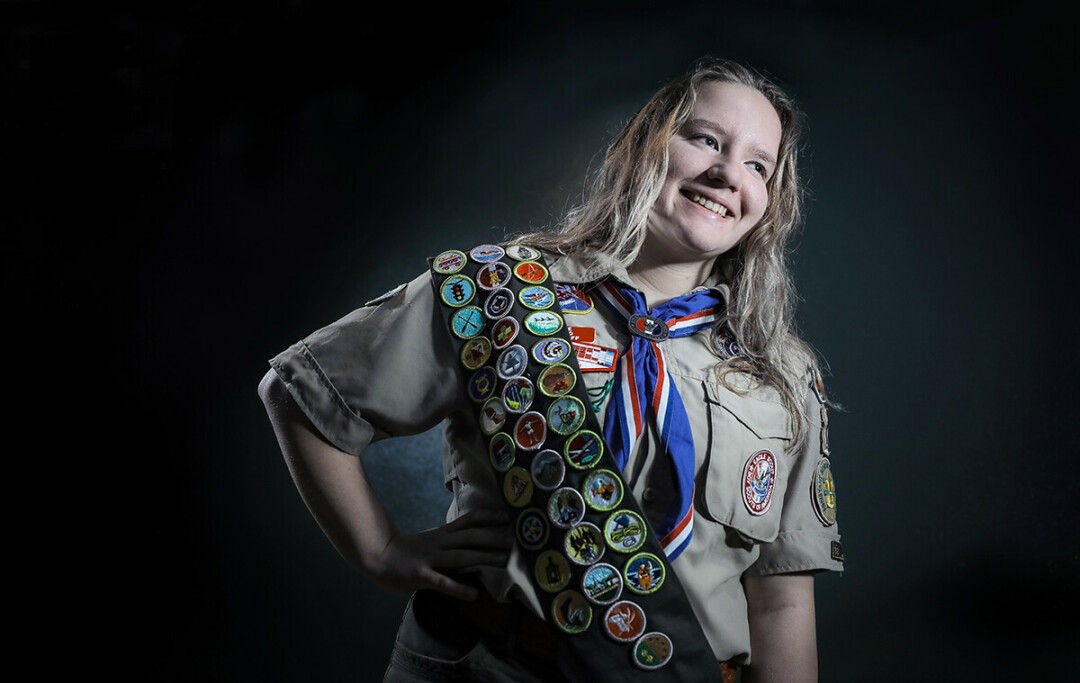 Seventeen-year-old Maddy Branco doesn’t need a badge of honor. In fact, she already has 36 merit badges – well over the required 21 to be an Eagle Scout.

The Eau Claire teen is part of both Scouts BSA (formerly known as the Boys Scouts) and the Girls Scouts, and will soon be one of the first girls in the nation to receive the Eagle Scout recognition – and will simultaneously receive her Gold Award, the highest honor in Girl Scouting. On top of her awards and honors, Branco is a junior at Memorial High School (enrolled in Advanced Placement classes and rigorous coursework in which she enjoys healthy debates and making concise arguments, she says), part of three local ice skating teams, a cheerleader in two local squads, works part time as a personal care assistant, and – on top of it all – makes time to help her community.

“The more I get done now,” Branco says, “the more I’ll have in the future. If I wait, I feel like my whole future would just be waiting for the next thing to happen. But if you start young, and do what you want to do young, you’ll eventually get a step up on life and keep going. And you want to climb the ladder of success. So starting young is easier than waiting until you’re older.”

"If you start young, and do what you want to do young, you’ll eventually get a step up on life and keep going. And you want to climb the ladder of success. So starting young is easier than waiting until you’re older." –Maddy Branco, Eagle Scout

Branco’s Eagle Scout project was to create and donate four picnic tables to the Flying Eagles Ski Club. Amid this year’s competitive season, spectators had no place to comfortably watch the sport. Branco worked with the ski club – which helped both of Branco’s older brothers Mitchell and Marshall with their Eagle Scout projects – to get the project done. “I was like, just give me any project,” she says. “You give me a project, and I’ll do it.”

“Maddie has always made her dad and I very proud,” says mom Michele Branco. “She’s one to set her mind to something, and will find a way or figure out, ‘How can I do that?’ ”

Though Girl Scouts and Boys Scouts were founded to be differentiated by gender, the organizations are different in other ways, too, Branco says. While Girl Scouts focuses more on how to emotionally help people, Scouts BSA teaches more physical skills – such as learning to swim or physically helping people. “It’s not necessarily (about) being a boy or a girl,” Branco says. “It’s just, ‘Do what you want to do.’ ”

Though Branco was inspired to help her community, not win awards, she joined Adventure Crew six months prior to joining Scouts BSA, which enabled her to get a head start on her merit badges and allowed her to earn both of the highest awards in Scouting. In 2019, only 8% of Scouts BSA members reached their Eagle status. Each year, the Gold Award is awarded to fewer than 6% of Girl Scouts.

“Eagle Scout badges aren’t just about being an Eagle Scout,” Branco says. “It’s about the skills you learned before getting Eagle Scout. Even if I didn’t get all these interviews or TV stuff, I would still be so proud because it’s a huge accomplishment.”

When it comes to the future, only one thing is certain for Branco: “I want to be a leader,” she says, “and I want to lead a team.” Her first path is in the field of healthcare administration, leading a team of doctors like her grandfather does. “Or,” she says, “be a government official. Maybe president.”

Rebecca Mennecke joined the Volume One team as Associate Editor in 2020. Rebecca studied creative writing and journalism at the University of Wisconsin-Eau Claire and formerly served as editor of None of the Above, managing editor of The Spectator...