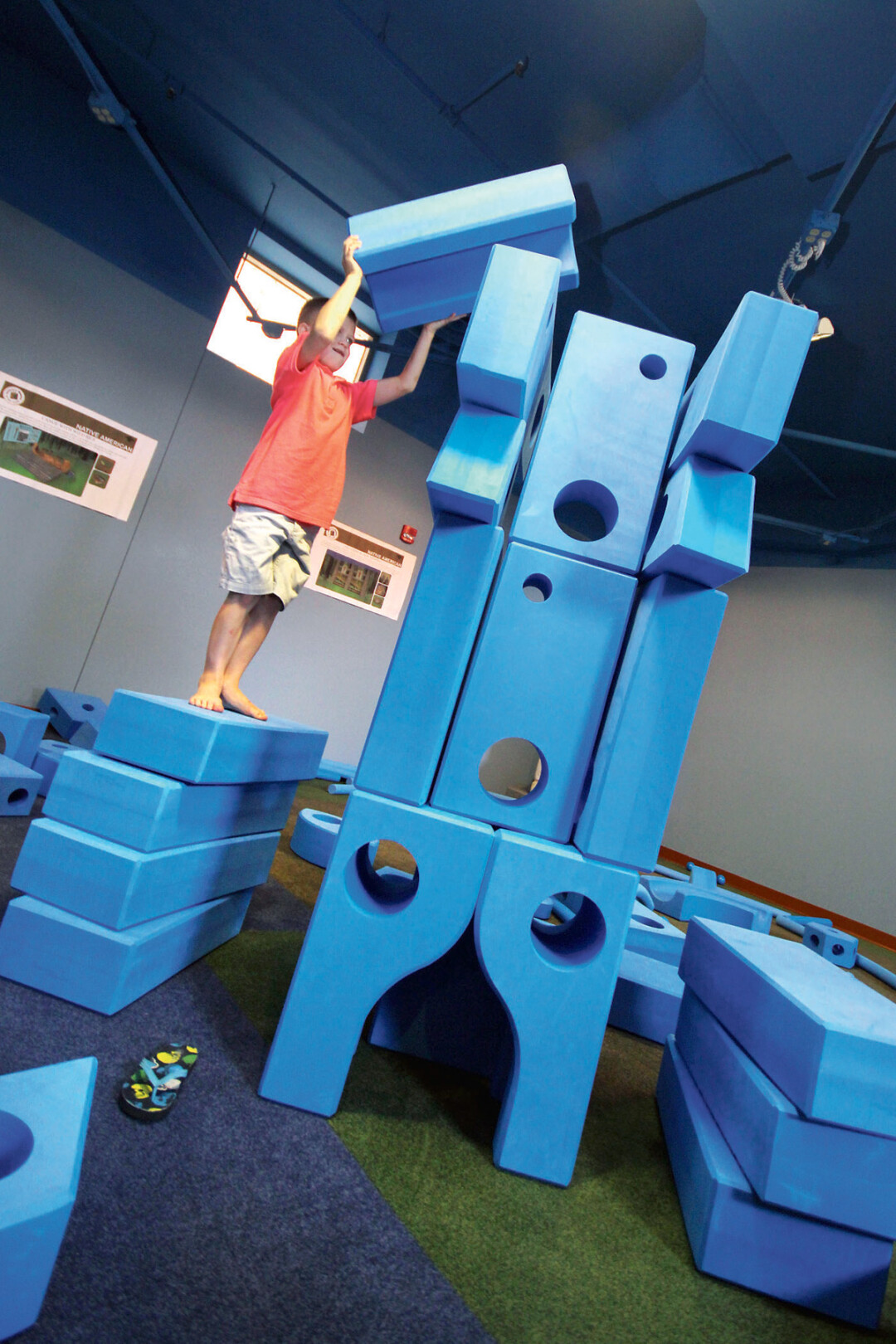 THE IMAGINATION PLAYGROUND AT THE CHILDREN’S MUSEUM OF EAU CLAIRE – A SET OF OVERSIZED BLOCKS – IS GREAT FOR IMAGINATIVE PLAY.

For many parents, a new school year means flashcards, homework and shuttling kids to so many extracurricular activities it would make a professional chauffeur blush. Parents of even the littlest children often fret under rising academic pressure for “school readiness” and test prep. But before you pre-register your newborn for pre-school, take a breath and consider the wealth of research suggesting that children who are given the most unscheduled and unsupervised play time are actually the ones reaping the greatest rewards.

According to the American Academy of Pediatrics, unstructured, child-driven play is crucial to healthy brain development, helping children solve their own problems, handle emotions like anger and fear, socialize with others, grow a love for learning and develop executive function – the (very important) ability to work independently, set goals and figure out how to reach them. And because play disguises all this development as “fun,” kids don’t even realizing they’re learning stuff!

Unfortunately, according to psychologist David Elkind, kids today spend 8 hours less each week playing than their counterparts did two decades ago. Not only does this loss of imaginative play mean kids are less creative and independent, but according to psychologist Peter Gray it also puts them at greater risk for anxiety and depression and for problems with self-control and paying attention.

In other words, although it may look like your kids are “just playing,” under the surface they’re hard at work ... er, play ... becoming happy, healthy adults. Play is not a break from learning – it IS learning. In fact, play is so important to optimal child development that the United Nations High Commission for Human Rights named it a right of every child.

As we like to say at the Children’s Museum, play is very serious business! So how can you make sure your kids are “well-played?” Here are a few play-full suggestions:

True free play takes time, and boredom is the prerequisite for creativity, so don’t be afraid to preserve an hour of daily, activity-free, screen-free play for your family. After all, that angsty feeling you get when you’re bored is just your tip-off that a truly creative idea is just around the corner. Resist the urge to pacify it with technology or guided activity. Let the feeling sit long enough and soon you’ll find blanket forts, babysitters’ clubs, imaginary kingdoms, and maybe even a dragon or two. (Who knows? Maybe you’ll get a moment of quiet, too!)

Study your children and observe their behavior as they’re hard at play. Then, practice translating their play into what’s happening under the surface. For example:

• Promotes literacy and language by using symbols and introduces abstract thought
• Gives children the means to exert control over their environment and regulate their thoughts and feelings
• Introduces social skills when children create a world and abide by its rules (“You’re the princess and I’m the queen.”)

• A child building a tower using blocks.
• A child arranging an assortment of cups by size.
• A child dropping a toy, picking it up, and dropping it again.

What’s Happening?
Object or Manipulative Play! This kind of play...

• A child playing hide-and-seek or tag with a friend.
• A child jumping onto each sidewalk square.
• A child dancing expressively around the room.

It’s not always easy to know exactly what to do or say when your child is playing and experimenting, but being attentive and playing with them is a great start. Step into their world (albeit imaginary), resist the urge to prompt certain behaviors and ask questions:

It takes practice, but play soon becomes second nature – sort of like riding a (make-believe) bike!

As your child’s first teacher, it’s important to understand the need for play in your child’s life. Whether taking a trip to the playground, making up songs during a car ride, or climbing through the giant digestive system at the Children’s Museum, what you do and say when encouraging your child in his or her learning makes a big difference!

So remember, kids and grown-ups of the Chippewa Valley: Play early, play often and play on!

Jacqueline Van Hemert is the Director of Programs & Events at the Children’s Museum of Eau Claire. She’s an enthusiastic advocate for the power of play, the power of “edu-tainment” and the power of a good cup of coffee.