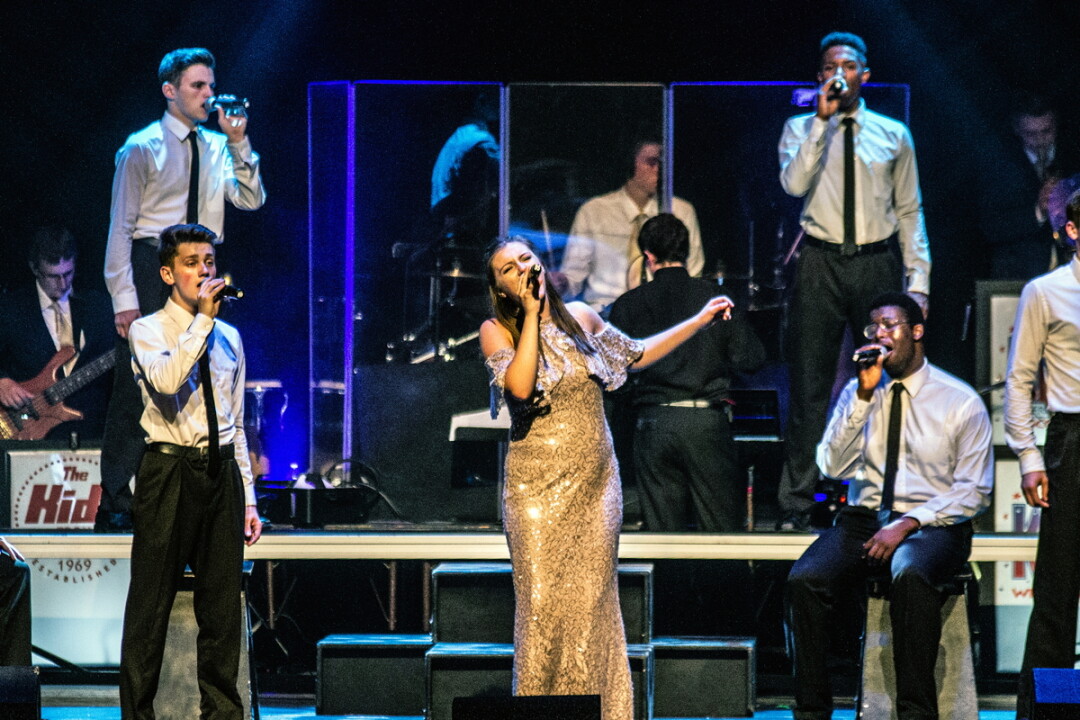 It’s not Panic! At The Disco’s “High Hopes” that draws attention. It’s the performers who glide and spin so effortlessly across the stage that it’s easy to forget that many of them are still in high school or just starting college. Since mid-May, these young adults have pushed their minds and bodies for 12 to 18 hours a day and found a strength that – when their journey with Kids From Wisconsin began – many of them didn’t even realize they had.

This year marks the 51st year of the Kids From Wisconsin tour. The tour took off in June and closes in August after more than 70 performances across Wisconsin and a stop in Dubuque, Iowa. The theme of this year’s tour will be “The Beat Goes On.” It entwines today’s pop hits with iconic music from artists whose talents will be remembered for generations to come: artists like Billy Joel, Tina Turner, Cher, Queen, and Gershwin.

While the ensemble is composed of youth ages 15-20, the performance resembles something beyond what you’d see in a high school auditorium. Troupe members describe it as a “Broadway-style performance complete with a 14-piece band.” Auditions began last February with 300 extremely gifted applicants. Of those 300, only 36 students were chosen to be a part of the troupe.

One of the troupe’s youngest members, tenor Spencer Rhoten of Eau Claire, was kind enough to take time out of his busy rehearsal schedule to chat with us about his experience with Kids from Wisconsin and the arts. “Well, I don’t feel like one of the youngest members of the group,” Spencer chuckles. “I’ve been involved with the arts since I was 3 years old. Music is a part of me.” The great thing about being a part of this troupe, Spencer says, “is that we all bring something to the table. Kids From Wisconsin teaches us to give each other space, to love one another, and appreciate everyone’s talents.”

Spencer started attending Kids From Wisconsin workshops at the age of 10, but he most remembers its 49th season. That’s the year he watched his friend Matthew perform. It was also Matthew who encouraged Spencer – then just a freshman at Memorial High School – to audition for Kids From Wisconsin in its 50th season last year. Spencer remembers how reluctant he was to try out. The audition process is difficult. Prospective members have 15-20 minutes to learn the most-difficult dance number of the performance and are expected to replicate it in addition to freestyling for one or two bars of music. “I didn’t think I was near good enough to get in,” Spencer recalls with warm humility. “I was extremely excited and honored to get in. It’s one of the friendliest ensembles I’ve been a part of in my entire life.”

It’s Spencer’s second year performing with the troupe, and he’s thrilled for what this season has in store. Like Spencer, many of this year’s troupe members are veterans, which gives the troupe a heightened energy. “We were great last year, but I feel like we’re more on top of our game this year,” Spencer said. “We’re ready to give it 180%, from our first show to our very last show.” He’s also very excited to perform at the Pablo Center at the Confluence. He loves performing in Eau Claire because we’re a community so positive about music. Eau Claire has been instrumental in fueling his passion for the arts.

While Kids From Wisconsin helps strengthen music and performance skills, Spencer feels that the group is about so much more. Through this program, Spencer has kindled friendships that he will remember for as many years as the stars span the skies. It’s the people he will remember most and the ways he was able to connect with them as people, not just as performers. “Being a member of this ensemble has taught me a lot about patience and perseverance,” he shares. Spencer encourages any youth who wants to pursue music and the performing arts to explore their opportunities and remember that talent alone can only carry them through part of their dream. “Hard work coupled with your talent will take you all the way,” he says.

The Kids from Wisconsin’s “The Beat Goes On” Tour will visit the Pablo Center at the Confluence at 7pm Saturday, July 13. Tickets are $20 for adults and $15 for students. Learn more at pablocenter.org. The performance will be preceded by a free workshop for kids ages 7-14 from 3:30-4:30pm. Learn more about this opportunity at kidsfromwisconsin.org/outreach.